History has shown that credit for great achievements often goes to the wrong person. King Ferdinand and Queen Isabella of Spain initially gave credit for the discovery of the new world to Amerigo Vespucci rather than to Christopher Columbus. The political agenda was to declare the new lands the sole property of Spain and not share them with other European monarchs. Of course, Leif Erikson had explored the new continent in the 11th Century, and evidence suggests that the ancient Egyptians were importing cocaine from central America for the Pharaohs long before that. Indeed it may well be that America is the real historical Atlantis; the great lands beyond the Pillars of Hercules (Gibraltar) told by the ancient Egyptians to Plato. But I digress.

If you are like me, you were probably taught in school that Gutenberg invented movable-type printing, Thomas Edison invented the electric light, that the Wright Brothers built the first powered aircraft, that Henry Ford invented the automobile, Alexander Bell invented the telephone, and Marconi invented radio.

Humphrey Davy invented the light bulb in 1802, 77 years before Edison.

Gustave Whitehead flew his powered aircraft in 1901, two years before Kitty Hawk. A recently discovered photograph confirms the event, and a reconstruction of his original design by aviation engineers not only proved it could fly, but flew better than the first Wright flyer.

The first telephone was created by Antonio Meucci, who was too poor to file a patent. (There is compelling evidence that a young Alexander Bell actually stole Meucci's plans when he worked at the offices of a potential investor of the device)

Nicola Tesla filed a patent for radio in 1897. Marconi attempted to file a patent for radio in 1900 but was rejected due to Tesla's prior work. But Marconi, with greater resources from his backers, succeeded in building the first radio able to transmit across the Atlantic ocean, and the media of the day proclaimed him the father of the invention. In 1943, the United States Supreme Court ruled that Tesla, not Marconi, had come up with the idea first, and that Marconi's Atlantic transmitter clearly used Tesla's designs.

I mention this because there is a name I want you all to remember. Dr. Gilbert Levin. I wrote this article in response to a news report that appeared the other day in the UK Independent. There just might be life on Mars....Nasa Curiosity rover picks up mysterious methane 'burps' that could possibly be coming from alien organisms

The gist of the story is that Curiosity has been detecting sudden bursts of methane erupting from small areas on the surface of Mars. These methane bursts are not explainable by geological processes, which tend to result in methane flowing steadily from large areas. But colonies of bacteria just under the surface would generate methane, which would accumulate until there was enough pressure for a "burp" to pop up through the overhead dust. Curiosity is going to perform more tests to try to confirm biological activity, and when they do, we can count on the present day NASA management to claim credit for what will truly be an Earth-shaking discovery.

Life was proven to exist on Mars back in 1976, during the Viking Missions, but for political reasons, ignored. Here is the story.

Back in 1976 the Viking Landers carried two different experiments to detect life. The first took a sample of Martian soil and dropped it into a generic nutrient solution tagged with a radioactive isotope and waited for radioactive gas to be released by metabolic processes. This experiment showed a positive result.

NASA was faced with one positive and one negative result. Most of us sitting at those consoles were convinced the positive needed to be given priority.

NASA was under a huge amount of public pressure over the issue of life on Mars. In particular the Buy-bull bangers were adamant that there could not possibly be life on Mars because the Bible did not mention it, and life on other planets meant Earth was not special in the eyes of whatever gods were being prayed to. Some of the controllers were getting death threats from fanatics like the Children of God. The post-Apollo "New" NASA was already entrenched. The scientists with the PhDs were no longer in control, but political appointees with MBAs ran the show, and so a political decision was made to ignore the positive result, rely on the negative, and declare that Viking had not found any life on Mars at all. That placated the masses at what we all felt was the expense of the truth.

There is no question that confirmation of extraterrestrial life will be a socially transformative event. Humans might decide to put down their weapons of war and unite to find out just who is out there. For those governments dependent on war, that is a huge threat to their power and ample motive to bias their assessment of the Viking results towards the negative.

And before anyone shouts, "Oh no, NASA would never hide such an important find", please recall that when Marco Polo returned from China he was promptly locked away in a dungeon by the Dominicans on the orders of the church, who thought that their control over Europe would be threatened by public awareness of a great civilization to the East that had never heard of Jesus. Eventually, word of Marco Polo's discoveries leaked out and he was released.

Now, years later, subsequent probes to Mars have discovered a high amount of perchlorate in the Martian soil. In the presence of heat, perchlorate will decompose organic molecules. So the Viking organic mass spectrometer was destroying the organic molecules before it ever had a chance to detect them. That means the negative result was bogus data and can be discarded. That leaves just one positive result.

In subsequent years, other scientists have re-examined the Viking data and come to the conclusion that Viking's LRE did indeed find life on Mars!

UPDATE: NASA announces liquid water on Mars and the possibility of life!

On September 28, 2015, NASA announced that they had found liquid water on the surface of Mars, which hinted at the possibility of life.

As usual, NASA is way behind the times!

Liquid water was photographed on the surface of Mars by the rover Opportunity back in 2004. And as this article points out, life on Mars was detected by Viking's Labeled Release Experiment.

UPDATE: Recent images from Curiosity show features on Mars similar to features on Earth that are created by microbial activity. 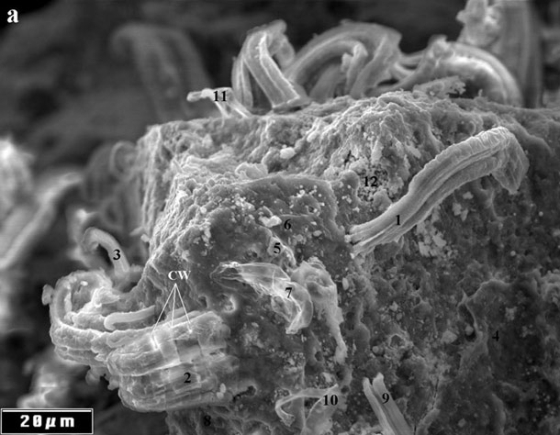 As I ramp my animation business back up, I am working on a small documentary on Mars, during which I did a web search about the fossil microbes seen in a meteorite recovered in Antarctica determined to have originated from the planet Mars. This story briefly made the major news in 1966, then faded.

I was rather surprised to find out that there have been dozens of other papers published detailing separate cases where scientists have discovered microfossils that appear to be biological shapes that do not match anything known here on Earth inside of meteorites, primarily carbonaceous chondrites. Each paper is immediately followed by dismissive articles in the corporate media that ridicule the idea that there is any evidence for life elsewhere in the universe. Usually there is no refutation of the data, only comments like "Rubbish" provided by "authorities" eager to see their name in major media. Needless to say, funding to pursue the question of what these fossilized objects are is almost as rare as funding to study the coming ice age!

In the above article on Dr. Levin I drew a parallel between Europe's initial suppression of Marco Polo's discoveries in China (to preserve the power and authority of the church) and a very obvious institutional bias within NASA against confirmation of the Viking results. I observed that confirmation of life on other worlds would be a socially transformative event, leading humans to put down their weapons of war and unite together to find out who is out there. This would be a threat to those whose wealth and power rests on the machinery of endless wars.

But in looking at all these papers and all the micrographs, there is enough "smoke" here to wonder if we should be looking for the fire, and if confirmation of extraterrestrial life has literally been under our feet all along! 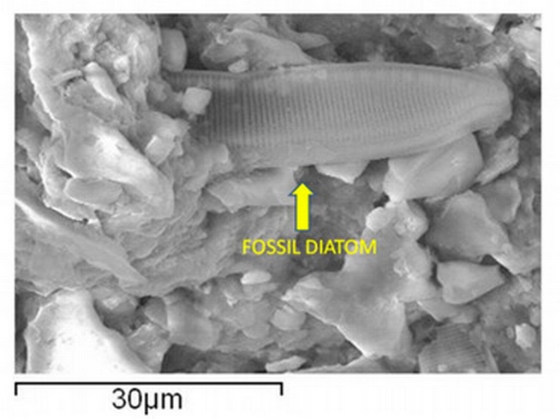