Niall Ferguson: "Kissinger Is Right To Worry" About Possibility Of World War 3

2022 was the year in which war made a comeback. But Cold War II could become World War III in 2023... with China as the arsenal of autocracy. 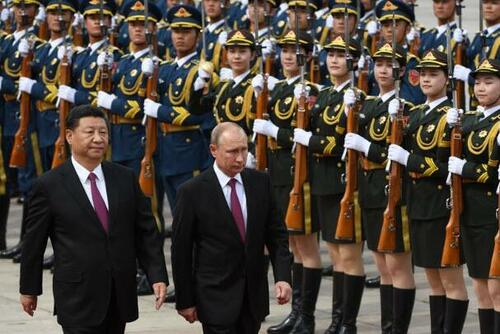 Israel’s new foreign minister, Eli Cohen, spoke with Russian Foreign Minister Sergey Lavrov on Tuesday and passed a message from the US, The Times of Israel reported.

Hunter's laptop is full of lewdness, perversion and unconscionable acts. Watch at your own risk.

The United States — as announced last month[1] — began to send new B61-12 nuclear bombs to Italy and other European countries. A U.S. Air Force Department official document confirms this.

The document establishes “safety rules for C-17 airlift operations transporting B61-12 weapons in the U.S. European Command area of responsibility.” That area, in the Pentagon’s geography, includes not only Europe but the entire Russian Federation.

An air base deep in Russian territory has been attacked twice with drones in less than one month. It is not some remote outlying facility either. The air base near the city of Saratov houses nuclear-capable Russian strategic bomber aircraft.

The U.S. Has a New Partner in the Fight Against China | Opinion

Beijing is not pleased.

Tokyo just announced it will soon acquire the ability to destroy faraway targets with cruise missiles. On Friday, Japan released its National Security Strategy along with the National Defense Strategy and the Defense Buildup Program.

China's Tokyo embassy immediately announced it had issued a diplomatic protest for "stirring up tension and confrontation in the region."

A new book alleges President Joe Biden had a vulgar outburst when finding things left behind in the White House by former President Donald Trump, thinks the Secret Service is a covert hive of “MAGA sympathizers” and disbelieved agents were attacked by his dog Major on the White House grounds.

A "Changed" Man: Biden Delivered End-Of-Year Pardons For These Crimes He Was Once VERY Tough On

However, at one point, he used to have a tough stance on all of these same crimes. None of the people pardoned are still in prison, by the way.

According to NYPost, “President Biden pardoned six people Friday — including a battered wife who killed her husband decades ago, a man who sold untaxed whiskey at age 18, and a former soldier who pleaded guilty to getting high on ecstasy.”

In one of its final acts, the House January 6 Committee warned the White House it cannot ensure the confidentiality of certain witnesses.

Chairman Bennie Thompson (D-MS) and Vice Chairwoman Liz Cheney (R-WY) wrote to Richard Sauber, special counsel to President Joe Biden, saying they “fully share” a “concern for the safety, security, and reputations” of its witnesses as the panel dissolves and Republicans take control of the House this week.

There is no doubt that NATO is trying hard to escalate the war in the Ukraine.  Just before the end of the year there were two drones strikes against a major Aerospace Forces base in Engels.  The attacks were not very successful, but Russians did die when shrapnel hit a fuel truck which exploded.  The importance of that attack was that Engels is located deep inside Russia.