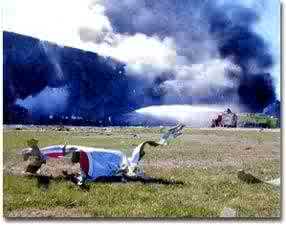 As can be seen by the above, there are photos which show the wreckage of the aircraft that struck the Pentagon. The claim that there was no plane that hit the Pentagon was never credible. If the plane hadn't hit the Pentagon, where had it gone? There were simply too many witnesses to the plane for it not to exist.

One of the earliest clues that this was a deliberate operation by an intelligence agency was the sheer volume of emails insisting that this issue HAD to be looked at. Sometimes the spooks betray themselves with their own heavy handedness.

So, why would anyone work so hard to try to establish such an obviously phony straw man?

The truth is that the US Government's credibility within the nation and around the world has hit an all time low. Traffic at this website has quadrupled in just the last week alone, with about 50,000 accesses per day of the main article page. The US Government has had a long history of trying to trip up critics of the government with phony planted stories, in order to discredit and embarrass them. Such certainly seems to be the case now. Government operatives have been feeding this bogus claim that there was no plane impact on the Pentagon all over the internet, while the media tries to claim that this idea is the generally accepted view of all government critics. Then, when the government hands out photos of the actual impact taken by a security camera, the same media will work hard to dismiss all critics of the government, indeed the internet community as a whole, as not worthy of serious note. Intelligence agencies call the practice "poisoning the well", and like staging fake terror attacks on ones own people to start a war, such dirty tricks have been used by governments for thousands of years. The "umbrella gun" in the House Select Committee On Assassinations was a similar operation. More recently, during open congressional hearings into public concerns about government abuse, a plant was sent in, dressed in camouflage fatigues, to scream about the secret government tornado making machines. This planted operative became the focus of the media's subsequent campaign to dismiss anyone who would be concerned over government abuse as not worthy of notice.

Have no doubt; right now there is a war being waged for the minds of America, and the internet is the high ground. The government always plays dirty, because anyone who still plays fair will be at an automatic disadvantage.

This story that the plane did not hit the Pentagon was obviously flawed, primarily because it did not account for where the uncrashed plane went off to. So, think about all the people who tried to sell you this lemon (in my case, many of the return email addresses were fakes), and recognize that they are either idiots or government stooges.

Note the timing of the phony story, appearing just at the right moment to distract attention away from the Israeli spy scandal, right when the United States, even as it tries to conceal the existence of the spy ring, rounds up the Israelis and deports them..

This is why, even though the claim that Flight 77 had not hit the Pentagon never explained where flight 77 went off to if it didn't hit the Pentagon, even though photos have surfaced of the aircraft debris and even though there are witnesses that saw the plane, the spooks are working even harder to try to keep this story alive; to manufacture a false debate as an attractant, because this is the only way they can control what the public is looking at, to keep the public from looking at the spy scandal and what it means that the United States Government CLASSIFIED the evidence that linked those Israeli spies to the events of 9-11.

Everyone who is still trying to keep this missing plane story alive, to manufacture a controversy where none really exists, to distract from the Israel spy scandal, is either an idiot or working for the governments of the United States and of Israel.

"Evidence linking these Israelis to 9/11 is classified. I cannot tell you about evidence that has been gathered. It's classified information."
-- US official quoted in Carl Cameron's Fox News report on the Israeli spy ring. 02/21/02 C-130 crew saw the Pentagon strike

Return to top of What Really Happened